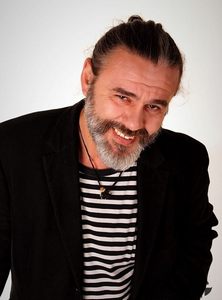 Zoltán's characteristically loose, cheerful, vibrant personality shows that he is not living a conventional rat race life. The man with the successful art career has been a butcher, a chef, a taxi driver and a poker dealer as well, but found his true calling at age 30.

Zoltán was born in the village of Jobbágy in Nógrád County. He stood out with his drawing skills even in primary school and attended drawing groups, but his peasant-born parents only waved it off, saying he can do some sketching after doing his plodding. However, his art teacher, Zoltán Jójárt, saw the dormant talent in the bad student: he embraced him, encouraged him and taught him about art. The feelings of success were then experienced in small things.  Like when he was given cigarettes for a drawing in vocational school, or in technical school, when he was asked to draw a building for a competition, and the final result was exhibited.

However, because of the apathy of his environment, this hobby was slowly forgotten, and he only picked a pencil and a brush up again as a middle-aged man. His reason was a double tragedy; Zoltán lost his mother and brother. Painting had helped him as a therapy in the stages of mourning. First, he took the photograph of his niece into his hands. Seeing that the drawing turned out better than he expected, he became enthusiastic and got more and more into colors and shapes. He got completely immersed in the process, which smoothed his troubled soul, and started to paint more and more, even in his thoughts; ever waiting to be captivated before the canvas again.

The next turning point in his life is linked to another trauma. He and his wife parted ways. It was a sharp turn to start a new life at the age of 40 after the classic house-child-dog idyll. During that time, in 2010, at a friend's invitation, he traveled to Mexico to acquire new experiences and ease his pain. After the first flight in his life, without any knowledge of foreign languages and with little money, he entered South America with great uncertainty. But what greeted him there exceeded all expectations: a vacation planned for one month - with minor interruptions – turned into four years; during which he soaked up the friendly, calm and cheerful life view of the locals. Zoltán absorbed the landscapes, the colors, the moods, and painted constantly. He spent his days on the shores of the Caribbean, the fabulous Yucatan peninsula, with his growing number of orders and exhibitions. One of the most beloved memories to date is the Mexican exhibition that was held from his works in Tulum, in the Pepe Néro Club. The opening ceremony grew into a huge party with 150 visitors, live music, a Hungarian violinist girl, and two DJ’s. Finally, he decided to move back home, because of his daughter.

An unexpected success knocked on his door at home when he organized an art camp in Fonyod, Hungary. His friend, film director, Rajan Pánovics and his partner, actress, Viktória Farkas, visited his studio there. Their talking turned into taking photographs and that turned into making a film. From a spontaneous, unplanned idea, a movie was made. It was called Jacky's World and was first featured in Toldi Theater, then in twenty other cinemas across the country.

After moving home, he founded a family again nice and slowly, and also found friends. Although his constant financial difficulties had disturbed his everyday life, he began to build his dreams. He had two artist friends who offered to help create something in the empty basement of Kazinczy Street 30. Though his friends' ideas and paths eventually took different ways, Zoltán began to work with what he had put together: an interactive studio and exhibition space. While the mission seemed rather hopeless, and many did not believe in it, the painter worked on it relentlessly on cold winter evenings, in the unheated basement, while several unselfish companions joined him. The gallery opened its doors in 2014 after a lot of adversity; then, under the name of Kazicum, now Jancsó Art Gallery. The basement gallery is open ever since from 4 PM to 8 PM, from Wednesday to Saturday. Besides the mixed-style permanent exhibition, exciting performances and public street paintings are also part of the programs from time to time.

Since Jancsó has taught himself to paint, he would be happy to give room to enthusiastic amateurs as well. The gallery’s main purpose is to take in art’s wildings, destroy the mystery around art and bring the work to the attention of curious people. Zoltan is proud that in his successful and self-sustaining business he has a kind, talented, non-competitive group of artists who regularly meets inside and outside of the gallery. The exhibitions have outgrown themselves, as the paintings in the nearby Szimpla Kert are often welcomed. The majority of visitors there and in the gallery are foreigners, as they are a little culture island in the middle of Budapest’s party district and the feedback they get from all over the world is really inspiring.

The artist likes to put on canvas the themes from his own life: this could be a negative experience, for example a bad dream, the loss of a family member, credit debt traps, or positive, like the gorgeous Mexican ocean shore. He only paints landscapes if he has been to the place and the view has „gotten through his filter”. This is why he usually does not work for order. He fears his work would become a soulless routine, which he could not identify with. Zoltán says he likes to be the fox in his own henhouse. As an art lover, he likes humorous society criticisms and caricatures. In addition he likes Cézanne’s colors, Picasso’s braveness and humor, Bosch’s madness, Modigliani’s point of view, and László Pál’s landscapes.

When he is not with his family, he is continuously organizing, thinking of ideas and creating. He also publicizes the gallery and its events, community programs and competitions. Zoltán Jancsó has built himself and his dreams up again from his faith and fortunately life justifies him.